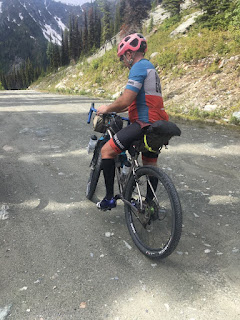 It is August, which means we are in the middle of peak riding season.  It is also the time you realized you let another summer slip by without a "real" adventure.  I am pondering a 24-36hr bike packing trip.  I am looking at riding the Root River Trail in Southern Minnesota.      Granted it will not compare to riding around the Western Rockies in British Columbia.  But why do we bike pack?  For each person that is a separate answer.  For me it is to be removed from my daily life.  It is a way for me to spend a lot of time outside and reminds me of my childhood in the country.
I am even pondering just doing a sub-24hr ride from my house and camp along the CVNT (Cedar Valley Nature Trail) at a State Park near LaPorte City.  I have in the past bandit camp along the Katy Trail when training for Trans Iowa in late fall.  When I bandit camp it is not really a big deal, just pull off on the trail to a park bench on the path in the dark.  I figure if an park official comes along and says something to me as I am camping at 10pm-5am I will most likely be told to keep it moving.  I know others who when they do illegally camp, go to great lengths to camouflage and hide.  I figure if you are going to lengths you make an appearance that you are up to no good.  The chances of someone coming down the bike path in a remote area on a week night and being upset at me in a sleeping bag is slim. 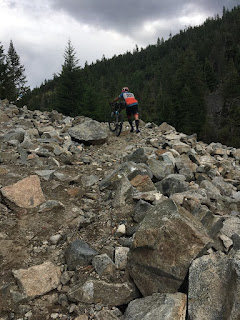 During the BC Epic 1000, the four of us came in to a Provincial Park at 1am, to find we were confused on where we could camp.  We also had been riding since 6am.  So we were not exactly sharp.  I saw a large tree in an open area.  I said lets bivy there.  We crashed a for three hours and were gone by 5am.  Point is, keep it simple and be in and out and do not hang around.
Please do not take my adventures as the gospel on how to bandit camp.  I know I am teaching illegal behavior and one should always try to abide by the policies of the local area.  What I am showing is how to have the least amount of impact to an area.  I have yet to be confronted by an official and I imagine if I was, I would be told to pack and keep it moving.  I keep my set up simple and sometimes do not even break out a bag.  I try to make bivy as simple as possible to show that it is a temporary situation.  If you break out a tent, I think you are conveying a different thought.  Also by using a bench area in middle of no where, you are blurring the lines of the spots intent, but you are also in an area you are suppose to be.
I do not advocate trespassing on private land.  A few things upset me, and that is an area I have issue with.  I will not trespass on private land.  To me there is no good excuse other life emergencies too.  If you are trespassing out of convivence you are showing disrespect to the land owner.  If you think about it, when you are out on the bike on a gravel road and you go up a driveway to a house an ask for water you are trespassing.  Now would the Sheriff arrest you, probably not.  Do I go up to a house an ask for water?  I have not, but I have gone up to a house and had people lock up their dogs because the dog was running along with me and wanted to go for a ride.  So i turn around an run the dog back to the home an ask politely they keep the dog inside for 5 minutes and give me time to depart.  I have yet to hostile incident, in fact the owner understands.
Back to my bike packing trip idea.  What ever I decide on doing is going to be last minute and short.  But I am wanting something to that gets me in to the summer nights.

Popular posts from this blog

Tuesday, April 26, 2022
Guitar Ted, I think 2021 July Saturday ride.         So if you are reading from outside of the glorious Cedar Valley you may not understand how close I live to Guitar Ted.  I am less than a 5 minute bike ride away from his front porch.  So it is fairly easy for me to coordinate a ride from time to time with him.  Oddly enough I think I am the only person outside of Tony in the area that askes Mark to ride.  I think a lot of people have a built up image of the "Gravel God" and his opinions on their rides.  In reality, I think he is just happy to share some gravel ribbon with others.  Often I have found he is more interested in the same things I am.  I think we both enjoy, bridges, old churches, and cemeteries.  And yes, we both have a thing for barns.  I wont dive in to barns, but occasionally you see some Iowa State developed round barns that are gorgeous, and occasionally I see a Western New York style barn that gets me excited.  Yes, I miss being 8 years old and throwing ha
3 comments
Read more

Pay to Play or Renegade the Route

Friday, March 11, 2022
H  appy Friday All,       I think my title today conveys a trend I am seeing or maybe I am imposing my thoughts on people.  Cycling is already an expensive hobby.  It use to be a Lawyer/Doctor hobby but in recent years, it has been spreading its tentacles to the middle class.  Gravel has helped this along.  Gravel use to be the Starving Artist genre of cycling, but I think race prices have shown it to be the other end of the spectrum.  I am not sure who the starving artist genera of cycling goes to these days, but I would lean to baggers.  Baggers, not bike packers, bike packers equipment generally costs more than my car.        I am often reminded of a childhood friend.  We use to skateboard and push our plywood around the small town.  We would dress in Alien Workshop, Plan B, and Raw Vibes attire.  Then one day, my buddy came out of the house wearing GAP.  We all gave him guff, and he looked at us and simply said, "These clothes were cheaper than yours."  We sat back and r
Post a Comment
Read more

The Magic of Gravel is lost, at least for me.

Sunday, January 30, 2022
It seems everyone has an opinion about everything.  And everyone knows or wants to be associated with the best.  It is just not bikes, it is every aspect in our lives.  In the grand scheme that speaks volumes about ourselves as a culture and a world.  An example is food.  We have to have the best street taco and if you are not having the best street taco, you are wrong.  We are evolving into a culture of snobs, or maybe we are already there.  And as I write this, maybe I am reliving my past.  Glory days no, but at least the past.     Full disclosure, I use to drink the Salsa Cycles Kool-Aid early on.  It was not because they were the best, it was because I thought they had well thought out bikes that no one else had.  The niche they created in 2013 - 2016 was ideal for how I was riding.  Today, they are just another bike company, and their designs and my wants/needs have diverged.  This is part of evolution, as I age out of their ideal sales demographic, and my body changes, we wi
1 comment
Read more

NY Roll
A traveling man who use to move a lot, now I have found myself in the same house for 13 years now.